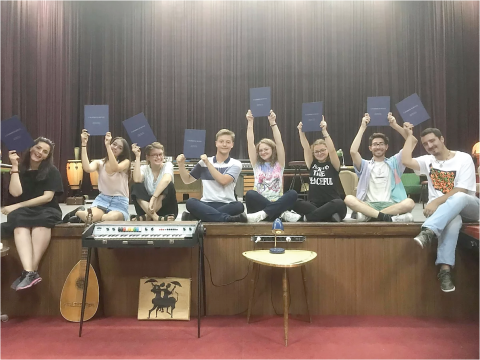 Last year’s winners, Emily Russell and Matt Harmon, were chosen for their Playwriting for Peace Project, a five-week program facilitating workshops and productions in Pristina, Kosovo.

Emily, a political science and environment double major focusing on research in conflict and peacebuilding, had been interested in the Kathryn Davis Projects for Peace since she heard about it as a freshman. “I thought it sounded like a great opportunity,” said Emily. “As an upperclassman I finally felt I had the right idea and the skills and I asked Matt to collaborate."

Matt, an International Studies major with a playwriting minor, had previously been involved with Ginsberg Center through community-centered workshops and the Alternative Spring Break program, but hadn’t heard about Projects for Peace before Emily approached him. He says he was “immediately all in.”

The program relied on collaboration between Matt and Emily as well as with local Kosovan partners and participants. Workshops were designed for high school and college-age students and focused on a range of theater components.

Emily describes the participants as a group of “creative, resilient young people with lots of ideas and hopes.” Both agree this was evident in the students’ stories they shared as they got closer over the course of the program.

“Watching the participants read each other’s plays and engage with their stories proved to me how much can be accomplished if we learn to empathize with each other a little more,” Matt said.

Workshops and play productions brought to light prevalent issues in Kosovo, but it also unified the facilitators and participants. “Oftentimes we think of finding multicultural agreement means homogenizing the things that make our culture unique or special, but we found out how much we had to learn from those who were different from us and from each other, while still finding common ground,” Emily said.

Before designing and facilitating the program, Matt didn’t have a strong idea of what he wanted to do post-graduation but says that their project changed that. “If I spend the rest of my life facilitating theatre workshops and helping those that don’t have access to the arts engage with its therapeutic and empathy-building capabilities, I would be beyond happy,” he said.

For Emily, Playwriting for Peace helped “fuse” her interests and studies between playwriting and political science. “As I apply to PhD programs, I am more passionate about applying research to tangible, meaningful interventions for change and continuing to use creative arts to facilitate peacebuilding,” she said.

Added Matt: “There is so little actually dividing us when we look at it from a human standpoint. However, that doesn’t mean we have to check our identities and experiences at the door. Playwriting for Peace taught me that we can empathize and work towards a greater world by encouraging the sharing of experiences and truths.”

Kathryn Davis Projects for Peace applications are due by midnight on Thursday, January 23, 2020.

For more information or to apply please visit http://myumi.ch/7ZkNB or email projectsforpeace@umich.edu.